How to BBQ Better – Tips For the Amateur BBQer Who Wants to Improve!

Everyone who owns a BBQ probably wishes that they knew how to BBQ better. Are you one of them?
Most of the time it is the small things that can turn an average BBQ into a brilliant BBQ and here we have compiled some BBQ tips to help you go from amateur BBQer to professional BBQer.

Tip one: make sure your meat is at room temperature before you put it on the BBQ. If you BBQ cold meat then it won’t cook evenly and you end up burning the outside and having no heat in the centre of your meat.

Tip two: after you BBQ your meat make sure you allow it to rest in a warm place, off the BBQ. Resting meat allows the juices that have been pushed to the centre of the meat during cooking to redistribute through the meat ensuring it’s more tender and juicy.

Tip three: most BBQer’s know that you should only turn your steak once. Over turning meat on the BBQ will lead to meat that is tough and chewy, and no one likes that.

Tip four: sausages are a favourite at most BBQ’s an in almost all cases sausages has been speared with a fork to avoid them bursting. This is actually a BBQ no-no as when you BBQ sausages with holes you are letting the moisture escape from the meat and allowing the fat to drip onto your BBQ’s flames. Sausages end up being dry and shrivelled and you risk a fat fire at your BBQ. BBQ your sausages without the holes and see if you can taste the difference.

Tip five: cleanliness is next to godliness, especially at a BBQ. Keeping your Barbecue clean of old fat, dead insects and decaying food will mean your next BBQ will be fresh and clean, and guests won’t be able to taste the residue of the last BBQ. Also, it is very important to know that BBQs are notorious for incidents of food poisoning. To avoid sick guests be careful of cross contamination, especially with raw and cooked food. NEVER put cooked food in a place where raw food was.

Tip six: BBQs can often be the same thing over and over – steaks, sausages, hamburgers- so why not be adventurous with your next BBQ? Try different types of dishes or even different types of BBQing styles, for example slow cooking, using dry rubs on meat or even smoking. Your guests will definitely be impressed at your next BBQ.

Ready to use each of these BBQ tips? Then why not organise a Barbecue for next weekend. BBQing better is not hard and by following these tips your friends and family will definitely crown you Barbecue King. But remember a BBQ King is only as good as the BBQ he cooks on so invest in a high quality BBQ that won’t let you down. Want to know more info click Fat Boy’s BBQ 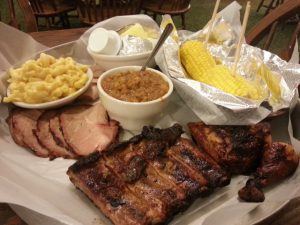